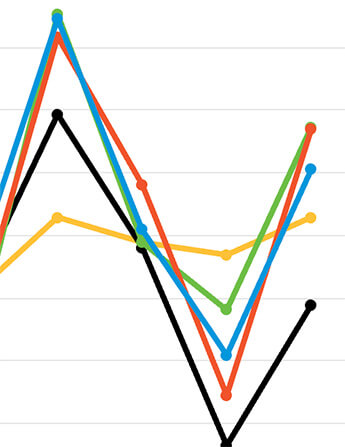 An update on changes in consumer spending in New York City to understand which of the city’s industries and businesses are most impacted by COVID-19.

Two weeks into the fourth and final phase of reopening, city spending growth has plateaued at slightly below 2019 levels, vastly improved since bottoming out at -53% in late March.

City spending growth spiked during the two weeks preceding July 4, exceeding 2019 spending levels for the first time since the city shutdown began on March 20. Sales growth began accelerating the week ending June 13, which marked the beginning of Phase I of reopening for the city and the conclusion of three long months of NY PAUSE. Spending growth continued to improve in late June, with the return of some office workers during Phase II of reopening beginning June 22 along with the July 4 weekend likely further lifting consumer spending.

Consumer spending data is provided by Mastercard. Mastercard SpendingPulse™ provides market intelligence based on national retail sales across all payment types. Findings are based on aggregated sales activity in the Mastercard payments network, coupled with survey-based estimates for certain other payment forms, such as cash and check.

Manhattan, Brooklyn Continue to Lag Rest of City Despite Reopening

Consumer spending has recovered unevenly across the five boroughs. Between March 29 and August 1, consumer spending in the Bronx lagged 2019 levels by 4%, slightly outperforming the -7% year-over-year rate registered in Staten Island and across the U.S. Meanwhile, both Brooklyn (-11%) and Manhattan (-12%) have experienced double-digit declines in spending from 2019 levels.

Every major category except for grocery posted higher sales than the previous week. Restaurants have posted four weeks of consecutive sales improvements.

If you are interested in receiving SpendingPulse™ reports, please contact us and we will make the connection.

SpendingPulse™ content is based on various sources including the aggregated sales activity of the Mastercard U.S. payments network coupled with estimates on all other payments forms including cash and check. SpendingPulse™ content or portions thereof may not be copied, modified or published in any form or media, except as authorized by Mastercard. SpendingPulse™ content (a) is intended solely as a research tool for informational purposes and not as investment advice or recommendations for any particular action or investment and should not be relied upon, in whole or in part, as the basis for decision-making or investment purposes, and (b) is not guaranteed as to accuracy and is provided on an “AS IS” basis.