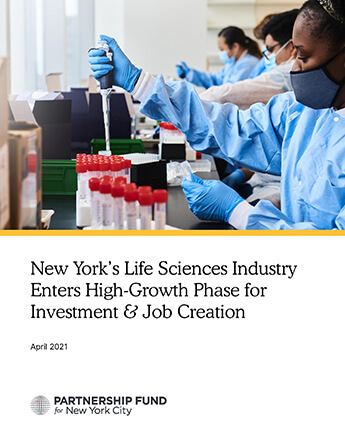 Jobs and investment in New York’s life sciences industry reached record highs during 2020 and will contribute meaningfully to the city’s economic recovery from COVID-19.

As an early investor in commercial life sciences, the Partnership Fund has worked closely with state and city government to promote New York’s evolution from a center of basic scientific research to a leader in commercial life sciences. In 2016, the state and city committed $1.2 billion to support development of the industry, providing a catalyst for development of wet lab space for early and growth stage companies, as well as business accelerator and job training programs.

The results have been dramatic in New York City, where jobs increased at a 3.6% annual rate over the past five years—while citywide employment declined slightly over the same period. The average annual earnings for a life sciences employee in the city also increased 67% from $85,000 in 2010 to $142,000 in 2020. Today, the industry accounts for 81,000 jobs statewide.

Ratio of Private to Public Investment

With new highs in NIH and VC funding, New York received 73 cents of VC funding for every dollar of NIH funding received in FY 2020, up substantially from 13 cents in 2016 and 6 cents in 2013. While New York still trails Massachusetts and California, which received about twice as much VC investment as NIH dollars in 2020, New York is edging closer to competing markets in Massachusetts and California as private investors identify the state as an increasingly attractive hub for emerging life sciences companies.