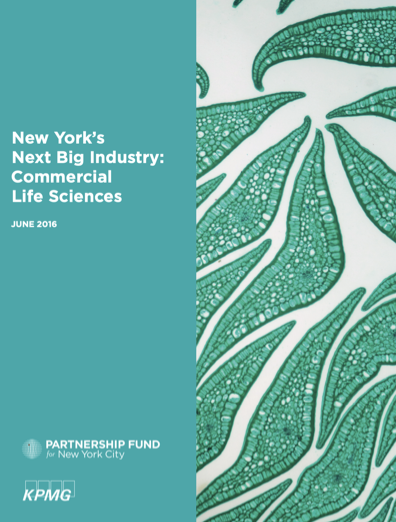 The report, done in conjunction with Dr. Susan Windham-Bannister (founding CEO of Biomedical Growth Strategies LLC) and KPMG, contrasts the strength of the city’s research institutions and top scientists with its relatively small number of start-up companies, venture capital investments and jobs in life sciences. It calls for public and private actions to develop the facilities and funding needed to capture the economic benefits of New York’s rich research and clinical assets.

For every $1.00 of NIH funding, Massachusetts sees $2.19 in venture capital funding for health care. By comparison, New York only sees $0.30.

Ratio of Private (VC) Investments to Public (NIH), Funding Since 2010

Note: Historical VC totals are subject to change, as the PwC Moneytree reports are updated periodically. Most notably, PwC Moneytree merged their data with CB Insights in 2017, resulting in slightly different sector definitions than were previously reported. In addition, some totals may change over time due to timing of actual awards and increases/decreases in award amounts.

The Partnership Fund estimates that the New York metropolitan region’s life sciences industry could double in terms of jobs and economic output over the next decade if the right investments are made by the private and public sectors.

The study found that for every $1.00 of National Institutes of Health (NIH) funding that Massachusetts received in federal fiscal year 2015, its life sciences industry attracted $1.32 of venture capital. In comparison, New York State’s life sciences industry secured only $0.06 of venture capital for every $1.00 of NIH grants, well below the national figure of $0.48.

If commercial activity in Downstate New York was on par with its NIH funding, the region could see an additional 18,000–25,000 jobs and $2.2–3.1 billion of additional economic growth.

In 2015, life sciences only attracted 2 percent of venture investment in Downstate New York. Over the past twenty years successful projects such as Alexandria Center for Life Sciences, the Structural Biology Center and the New York Genome Center have been supported by city and state government, as well as research institutions and private investors. There is huge potential for additional public/private initiatives to build on the accomplishments of these projects.

This is the moment for New York to move forward with a full-scale public-private initiative to create a world class life sciences industry cluster and become a global commercial hub of life sciences. Public and private programs and investments are needed to strengthen New York’s innovation capacity and state/city government, institutional leadership, and the city’s investment and philanthropic communities all have essential roles in capturing this opportunity to build a significant new industry in New York.

There is a need for investment in these four areas:

Space: Affordable and appropriately located wet lab space to accommodate companies both when they spin out of the university and then as they grow

Talent: Resources within the universities to support promising scientists who want to start companies and to identify talent to build those companies

Promotion: Better connectivity between the various stakeholders and a program to market New York’s assets