Reliable infrastructure is the essential foundation for urban growth, mobility, and livability.

New York City suffers from aging infrastructure that frequently fails to meet modern performance standards. Upgrading of airports, roads, public transit, water, and sewer systems has lagged growth in population and economic activity across the five boroughs. Investment in improving energy, resiliency, and telecommunications infrastructure has been delayed by bureaucratic and political obstacles. New York also has a severe housing shortage and much of its affordable stock is in very poor condition. For New York to remain a center of global talent and innovation, it will be necessary to mount a major public-private initiative to modernize the city’s built environment.

Public-private partnerships (P3’s) offer the most effective approach to modernization and expansion of urban infrastructure. The Partnership was founded on this principle and has been a leading advocate for the P3 approach to meet the city and state infrastructure challenges. Today, Partnership members are working with all levels of government to advance transit improvements, mitigate vehicular congestion, facilitate the transition from fossil fuels to renewable energy sources, increase the housing stock, upgrade telecommunications, and insulate the city against rising sea levels and extreme weather.

Congestion pricing has been approved for the Manhattan central business districts, estimated to raise $1.5 billion for transit and reduce the $20 billion annual cost to the region’s economy due to excess congestion.

The Port Authority of New York and New Jersey and New York state are leading over $20 billion of investments to rebuild LaGuardia Airport and upgrade John F. Kennedy International Airport.

Our Work in Transit and Infrastructure

The Transit Innovation Partnership (TIP) is a public-private initiative launched by the Metropolitan Transportation Authority and the Partnership for New York City with a mission to make New York City the global leader in public transit. Since its launch in 2018, TIP has expanded its reach to the Port Authority for New York & New Jersey, NJ TRANSIT, and NYC Department of Transportation. An advisory board of leaders from academia, business, civic organizations, and government guides the Transit Innovation Partnership, which brings together diverse stakeholders to realize public-private programs that improve public transportation through technology and process innovation.

The Transit Tech Lab is a program of the Transit Innovation Partnership that allows regional public transportation agencies to explore innovative, private sector solutions to challenges they face in operating the region’s subway, bus, and commuter rail services. Companies participate in an 8 to 12-week accelerator and, if successful, advance to a one-year pilot. The Transit Tech Lab is designed to speed up the modernization of transit operations and improve customer experience through the strategic deployment of emerging technology.

Following over a decade of advocacy, the Partnership helped get the nation’s first congestion pricing zone approved by the state Legislature. Congestion pricing is anticipated to increase peak period traffic speeds in the central business district by at least 15% and generate up to $1.5 billion a year to help fund modernization of the transit system. Legislation authorizing the plan was passed as part of the New York state 2019-2020 budget, reflecting the work of two commissions supported by the expertise of the Partnership and its members. The Federal Highway Administration’s Environmental Assessment was released in Summer 2022 and is undergoing public review.

To secure enactment of the zone, the Partnership ran a public education campaign and commissioned an analysis conducted by EY that demonstrates the economic impact of the MTA Five Year Capital Plan, which is projected to generate more than $60 billion in statewide economic output and over 57,000 jobs.

The Partnership joined labor, trade, and business groups in backing expanded design-build authority for New York City, which was authorized by the state in late 2019. Localities can now use this streamlined method of public procurement and contracting to save time and money through a single bid process. With expanded design-build authority, New York can more efficiently invest in its infrastructure and shave hundreds of millions of dollars from the city’s 10-year capital plan and years to project timelines.

The Partnership for New York City advises the Gateway Development Corporation by sharing the impact of the infrastructure projects on New York City’s business community and economy. The Partnership provides testimony at board meetings and public comment at press conferences in support of the Hudson River Tunnel project and Portal North Bridge. These infrastructure projects are vital to New York City as 330,000+ commuters cross the Hudson River each day pre-pandemic on public transit. This heavy traffic means that for every hour of delay on NJ TRANSIT, city employers incur over $7 million in losses.

The Partnership was an early supporter of the city’s plan to transition commercial waste collection to a zoned system to address inefficiencies, congestion, safety, and environmental concerns. The Department of Sanitation will create 20 zones throughout the city and select up to three carters to operate in each zone. An additional city-wide zone with up to five carters will be created for large properties where containers are filled at one stop and go directly to a waste transfer station. It will help the city achieve environmental goals, create standards for worker safety, and encourage increased investment in recycling and clean trucks. Zones are anticipated to go into effect in 2023.

The Partnership leads and supports many cross-sector industry groups focused on infrastructure investment and reaching the city’s environmental goals to combat the climate crisis.

A Guide to Green Infrastructure Funding

Helping New York secure federal funding for clean energy infrastructure, which is vital to the city and state’s transition from fossil fuels to renewable energy. 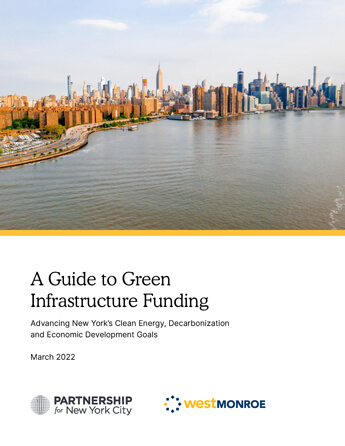 A poll of the city’s private sector workers reveals that concern about public safety, especially in the transit system, is the single biggest obstacle to mobilizing the return to work in the city’s office buildings. 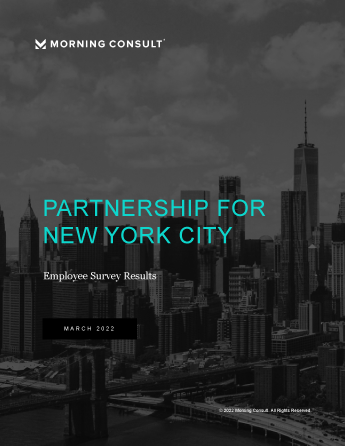 Traffic congestion will be a $100 billion drag on the New York metro area economy over the next five years unless something is done to discourage cars and trucks from crowding streets and highways of the region during the busiest times of the day. 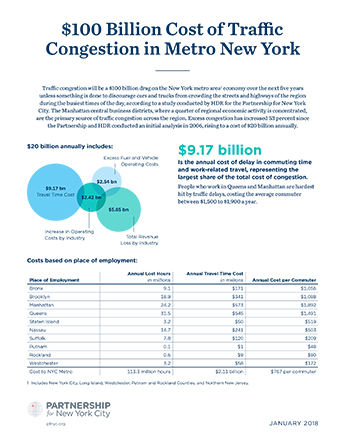 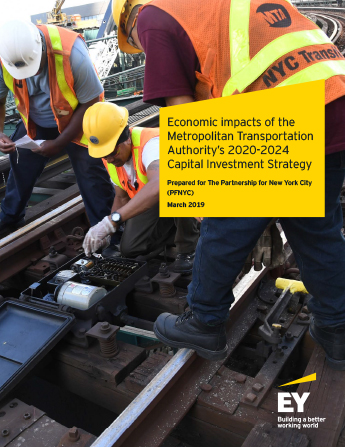